Gagauzia Tour- a trip to an autonomous region in Moldova with rich traditions.

We’ll start our Gagauzia tour with a visit to the capital of this enigmatic region – Comrat town.

In fact, the tour is a unique chance to hear the Gagauzian language listed by UNESCO as a rare and disappearing language. Namely here, you’ll try Gagauzian cuisine which is characterized by the abundance of fresh vegetables paired with sheep cheese from local farmers. And, of course, a variety of lamb dishes being very delicious and nourishing. Gaguazia is, also, very well known as a prosperious winemaking region producing high quality wines with a kind South Moldavian note. While there, take a chance to savor nice wines from the oldest winery in the south of Moldova “Vinuri de Comrat”.

The first official reference of Comrat dates back 1750.  There are a lot of legends about the origins of the name of Comrat city, for example, a widely spread legend talks about a black horse named «Comur at». This horse won the race, and, in its honor, the owner– a tatar named Orumbet Oglu named the area he was living in. While there, you will find out a lot of interesting facts in the historical museum of Comrat, you will see the Cathedral of St. John  the Baptist, a Turkish library and The Alley of Fame. Finally, peep into the Gagauz National University-the only university in the world, where the unique Gagauz language is being taught.

We’ll, later, continue to a nearby village Besalma -a very important site in Gagauzia where an ethnographical museum of the Gagausians was established and where we can get a full picture of roots of the Gagausians.

The date of the founding of the National Gagauzian historical – ethnographic museum  Cara-Ciobanu is September 16, 1966. The museum became the place of pilgrimage for all the lovers of antiquity, and sure for those who want to know more about  such a small nation, like Gagauz people. Since May, 1988 the museum bears the name of his founder – Dmitry Cara Ciobanu. In 1993, the Beshalma Village entered the UNESCO periodic newspaper as a unique focus of Gagauzian culture.

One of the Gagauzian highlights is, certainly, the village Congaz which’s reffered by the Gagauzian journalist, folklorist and poet Mr. Todur Zanet (born in Congaz) as  the “Europe’s largest village”.

We invite you to better familiarize with the Gagauz culture and traditions, local cuisine, and, of course, hospitality of the region, in a very pleasant Gagauzian corner- ethno courtyard “Gagauz Sofrasi”. The name of the courtyard stands for the small Gagauzian round table for the whole family. This is the place where old traditions and old ancestors articles have, obviously,  gained new life. Finally, this is the place where bread is baked according to old grandmother’s recipe in a real rural stove. Moreover, it’s served fresh and hot on the table. 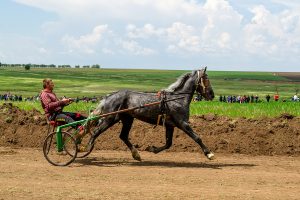 The town Ciadar-Lunga  has the only  breeding stud farm  in the Republic of Moldova “АТ-PROLIN”. The stud farm was founded in 1984, and already in 1992 was given the status of a breeding stud farm growing orlov trotter horses. Also on the racetrack, each year, on May 6, they celebrate “Hederlez”  – St. George’s Day holiday. The Manager – Konstantin Keles, is the main specialist in Moldova on the orlov trotters horses, also a good graphic artist. K. Keles is especially proud of a colt baby horse Farhad Pasha  (1997). It is an ideal that  the zoo technician-breeder aimed for many years.

So, the Gagauzia Tour can be combined with other tours in Moldova we’re offering, or it can be a part of an extended tour to Moldova.

Tour details are available on incoming@solei.md